• David McIntosh has over 40 years’ successful experience in business leadership, organisational development, management and application of research. Over the last eighteen years he has specialised in the leadership of technologically advanced image processing businesses, including broadcast electronics, video-analytics, biometrics and feature-rich database software. Currently Chairman of Law Enforcement and National Security software pioneers 3rd Forensic Ltd, he was previously the founding Chief Executive Officer of computer vision specialists OmniPerception Ltd (2002 to 2008), taking the company from start-up to commercial traction, with an established brand and world-wide customer base. David came to OmniPerception from the Snell & Wilcox Group where he was C.E.O. of modular broadcast electronics subsidiary Electrocraft Ltd, a business that he led from a turnover of under £1m to over £16m per annum during his five years in charge.

• From 1990 – ‘96 David served the NHS as Chairman and General Manager of the Scottish National Blood Transfusion Service. He led a major national reorganisation of the Service’s five regional transfusion centres, central research and development facilities, reagent laboratories, plasma processing plant and tissue bank. He was commended for his successful leadership of the Service through challenging times, including the provision of emergency blood supplies to HM Forces in the first Gulf War, the introduction of new testing and quality regimes, the achievement of national self- sufficiency in blood and blood products and the alleviation of the blood supply crisis in war-torn Bosnia.

• From 1987 – ’90 David was Director of the NHS in Scotland Management Development Group. In this role, he was responsible for reorganising and energising the service’s national management education, training and development programmes across all medical and health care disciplines and the setting up of new internal management consultancy services for Health Boards, hospitals and primary care organisations across Scotland.

• From 1968 – ’87 he progressed an international management career in a series of roles in textile multi- national Coats Patons plc, from graduate trainee to General Manager; latterly responsible for thecompany’s manufacturing facilities in Colombia, South America (’84-’87). He also served in the UK, South Africa, Spain and Portugal. From 1979 - 1981 David was Personnel Manager of J&P Coats Limited, responsible for HR both at home and overseas (75,000 employees).

• Educated at the Edinburgh Academy, Oxford University and The London School of Economics, David is a Chartered Fellow of the Chartered Institute of Personnel and Development, a Fellow of the RSA and a member of the Institute of Health Care Management and of the Royal Television Society.

• David is a former Chairman of the International Association for Biometrics, the Scottish Association for Quality in Health Care, the Glasgow and West of Scotland Outward Bound Association and the Scottish Council of the Independent Schools Careers Organisation. He is a former member of the Court of Governors of the Edinburgh Academy, the BBC’s Broadcasting Council for Scotland, the Board of the European Plasma Fractionation Association and the Council of the World Television Forum. He was a founding director of the UK Security Innovation and Technology Consortium (SITC) and remains an adviser to SITC on video analytics, biometrics and SME development. 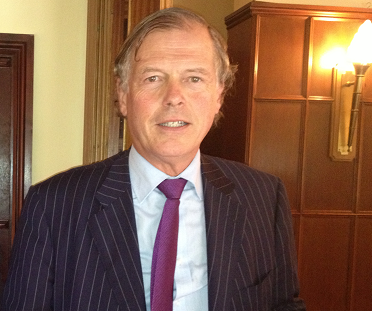